One Of Four Occupants Of Car In Single-Vehicle Crash Dies 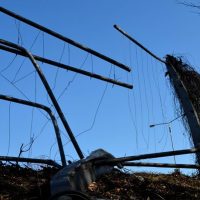 Car accident lawsuits and insurance claims related to traffic collisions do not involve the driver or passenger of the struck vehicle suing the driver of the car that caused the crash.  If you were a passenger in the car that caused the accident, you have the right to seek damages from the driver of the car in which you were riding.  This scenario can also occur in single-vehicle accidents.  Lawsuits against a driver by a passenger who got injured in that driver’s car are less common than car accident lawsuits where the parties were in different vehicles, but the legal principles are the same.  No matter the number of vehicles involved in the car accident, there is no need to file a lawsuit until you are sure that it is not possible to get enough money from an insurance claim to cover the treatment of your accident-related injuries.  To find out more about recovering your financial losses after getting injured in a single vehicle accident, contact a Columbia car accident lawyer.

Car in Fatal Crash Was Fleeing From Police

In December 2021, a 2008 Honda Accord driving on Bethel Boat Landing Road in rural Lancaster County veered off the road and crashed into a fence as it approached the border between South Carolina and North Carolina.  One of the passengers in the car, Ny’Darius McKinney of Lancaster, died at the scene of the accident.  He was 21 years old.  The other three men were transported to a hospital in North Carolina for treatment.

News sources did not identify one of the injured passengers, but the other was Terrance James Moore, 28, and the driver was Joseph Hinson, 35. According to the Fits News website, the vehicle was trying to elude law enforcement, because police were trying to execute an arrest warrant for Moore, who was wanted on charges of burglary.  At the time of the accident, Moore was allegedly free after posting a $30,000 bond while his case regarding another crime was pending.

What rights do the men injured in the crash have when it comes to collecting damages for the lawsuit?  In some other states, they could rely on their own personal injury protection insurance, but this kind of coverage is not available in South Carolina.  Where the injured victims should start when seeking compensation for their medical expenses depends on the determination of fault for the accident.  If McKinney’s family files a wrongful death lawsuit, which they have the right to do, it will also depend on how fault for the accident is allocated.