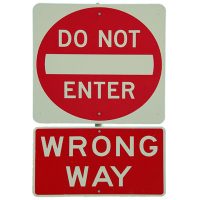 It is possible for car accidents to cause serious injury no matter the direction and angle at which the vehicles collide.  Whether one vehicle sideswipes or rear ends another or if it is a T-bone collision, the injuries are usually more severe for the occupants of the struck vehicle than in the striking vehicle.  Insurance companies apportion fault for the accident independently of which drivers and passengers got injured; in many accidents, both drivers bear a share of the responsibility for causing the accident.  Accidents where the vehicles collide head on tend to be catastrophic, though, but not exclusively because of the angle of collision; rather, there tend to be other factors involved in head-on collisions that increase the risk of death or severe injury.  In order for vehicles to crash head on, one of them has to be traveling in the wrong direction, and that vehicle is often moving too fast to avoid a crash.  Thus, the driver is often unaware of how fast they are going or the fact that they are going in the wrong direction; alcohol and drugs are even more likely to be involved in head-on collisions than in other traffic accidents that result in serious injury.  If you have been injured in a head-on collision, contact a Columbia car accident lawyer.

In October 2021, Rolesha Leann Spears was driving in the wrong direction on Interstate 77; Rylee Pate, 5, was a passenger in Spears’ car.  News sources did not indicate what Pate’s relationship is to Spears.  Near mile marker 80, Spears collided with an approaching vehicle, killing all three of its occupants.  They were Briasia Moore, 20, her sister Nykiera Moore, 17, and their cousin Jasmine Givens, 27.  Spears also suffered serious injuries and was admitted to the hospital for treatment.

In February 2022, after being discharged from the hospital, Spears faced criminal charges for her role in causing the fatal collision.  She faces four counts of felony DUI resulting in death.  Each count faces a maximum sentence of 25 years in prison, so Spears could face a sentence of more than 100 years in prison if she is convicted on all counts and the judge hands down the maximum sentence.  Spears is also facing charges for child endangerment.

Whether or not the drivers who cause fatal collisions are convicted of vehicular manslaughter or any other crimes in relation to the accident, the families of the victims have the right to file wrongful death lawsuits in civil court.  They may seek economic damages for the financial support they lost because of the untimely death of a family member on whom they defended, as well as noneconomic damages for emotional distress.

The car accident lawyers at the Stanley Law Group can help you seek damages if you suffered serious injuries when a driver traveling in the wrong direction collided with your vehicle.  Contact The Stanley Law Group in Columbia, South Carolina or call (803)799-4700 for a free initial consultation.