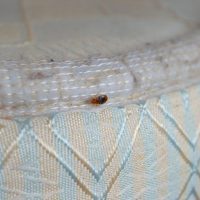 Read any discussion thread by people who have worked cleaning hotel rooms, and you will find an array of stories about the sights in the rooms that they have learned to ignore.  Priceless jewelry is just another item to move out of the way when cleaning and then put back where you found it.  Drug paraphernalia in the wastebaskets is just plain old trash.  It is not druggy motels that are to blame for the fact that Myrtle Beach cannot seem to shed the nickname “Dirty Myrtle,” though.  Orkin ranks Myrtle Beach in the top 50 cities in the United States in terms of the number of calls it receives about bed bug infestations.  In 2021, at least three Myrtle Beach hotels have faced lawsuits from guests who stayed in bed bug-infested rooms, only to have the creepy critters follow them home on their luggage.  One would expect that, when hotel cleaning staff change the sheets on hotel beds, they would notice bed bugs and evidence of them, such as eggs or droppings.  In fact, the plaintiffs in these lawsuits allege that it was the hotels’ responsibility to notice the bed bugs and to avoid housing guests in the rooms until the infestation is gone.  If you have suffered a preventable illness or injury because of bed bugs or another hazard in a hotel, contact a Columbia premises liability lawyer.

Jacob and Nicole Makins of Hernando County, Florida visited Myrtle Beach in September 2021 and stayed at the South Bay Inn & Suites.  When they woke up after sleeping in the hotel, they noticed bed bug bites on their bodies and bed bugs in the mattresses and bedding.  After they returned home to Florida, they noticed that bed bugs had also infested their home, presumably after crawling into the seams of their luggage while they were staying at the hotel in Myrtle Beach.

In December, the couple sued the hotel for premises liability.  In their lawsuit, they allege that it was the responsibility of the hotel management to detect and eradicate a bed bug infestation.  The hotel issued a statement saying that its employees inspect and clean the hotel rooms thoroughly.  Part of the hotel’s inspection protocol involves having K9 units inspect the rooms every six months.  It appears that the dogs did not notice any bed bugs in the rooms.  Yahoo News stated that Jacob and Nicole Makins were seeking damages, but it did not specify the amount.  The other Myrtle Beach hotels involved in premises liability lawsuits are the Patricia Grand and the Mermaid Inn.

The premises liability injury lawyers at the Stanley Law Group can help you seek damages if you suffered injuries because of dangerous conditions at a hotel, whether it was a bed bug infestation, a trip and fall accident on an uneven floor, or any other kind of injury.  Contact The Stanley Law Group in Columbia, South Carolina or call (803)799-4700 for a free initial consultation.