What’s The Deal With Blinding Headlights? 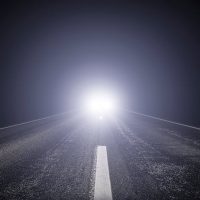 In a tweet that belongs in the grumpy car journalism hall of fame, journalist Jack Crosbie lamented the presence of “military grade halogen retina destroyers” on recent models of SUVs.  He went on to compare SUV headlights to lighthouses and the “9/11 memorial spotlights.”  Crosbie is not alone in his unease about the brightness of headlights on new cars.  There are plenty of petitions going around online urging lawmakers to ban blinding headlights.  The glare from headlights is a contributing factor in a substantial number of nighttime collisions.  In other words, the same headlights that make it easier for you to see other cars on the road make it harder for other drivers to see their surroundings in order to know how to avoid an accident.  The good news is that a new law will require car manufacturers to design their headlights in such a way that the risk of blinding glare is much lower.  If you were injured in a car accident where blinding glare from a car’s headlights was a contributing factor, contact a Columbia car accident lawyer.

Why Are Headlights on New Cars So Bright?

It is not just your imagination that the headlights on cars are brighter these days than they were when you first learned to drive.  Most new cars use LED lights, which are much brighter than the older halogen lights.  LED lights also tend to have a bluish color, which means that, even with the yellow filters that are on most headlights, they look brighter than their brightness rating in lumens would indicate.  In fact, Henry Grabar of Slate argues that the method for measuring light brightness should be revised now that LED light technology is widely used.

Blinding glare from headlights is most severe from SUVs, and not only because they tend to have the brightest headlights.  If you are driving a smaller, lower car, the headlights from an oncoming SUV interfere more with your vision than the lights from an approaching compact car would do.  In fact, several models of SUV have had their headlights recalled, not because they were too bright, but because their glare extended too far out to the sides, blocking the vision of the drivers next to them.

A new law aims to phase out the “lighthouse on wheels” style of headlights.  Beginning in 2023, newly manufactured cars sold in the United States will need to be equipped with adaptive driving beam lights.  These headlights are connected to software, and they automatically adjust their brightness as other cars approach.  This way, you will be able to see the cars nearby, but with the new technology, the drivers of the other cars will also be able to see you.

By The Stanley Law Group | Posted on May 5, 2022
« Fatal Motorcycle Accidents Do Not Always Involve A Car Striking A Motorcycle
Tips For Staying Safe During Myrtle Beach Bike Week »