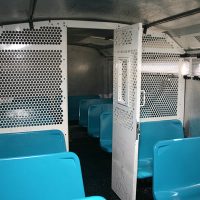 The deaths of two women in a sheriff’s transport van during Hurricane Lexington in 2018 was horrifying in that anyone who read about it could have thought of multiple ways that it could have been prevented.  Why not wait until the storm passes?  Why not use some other kind of vehicle?  Why not take a safer route?  Assigning liability in fatality motor vehicle accident cases is often complex; there are often multiple parties that bear some legal responsibility for the accident.  The case of the accident that claimed the lives of Nicolette Green and Wendy Newton is one of the most complex, though.  Some legal actions related to the accident are still going on in civil and criminal court, but last month, the manufacturer of a component of the transport van reached a settlement with the family of one of the victims.  If you have been injured in an accident where the malfunction of a vehicle part was a contributing factor, contact a South Carolina personal injury lawyer.

In September 2018, a court in South Carolina ordered Nicolette Green to be involuntarily committed to McLeod-Loris Seacoast Hospital in Horry County, despite that Hurricane Lexington was forecasted to make landfall in the area.  Two Horry County deputies, Stephen Flood and Joshua Bishop, picked her up from another hospital and escorted her into a locked cage in the back of a transport van belonging to the Horry County Sheriff’s Office; they were also transporting Wendy Green to the same hospital.  On the way to the hospital, the floodwaters caused by Hurricane Lexington swept the van off the road.  Bishop and Flood escaped from the front passenger area of the cab and attempted to free Green and Newton, but the padlock on the cage would not open, even after Bishop shot the padlock with his gun.  By the time Bishop and Flood could flag down rescuers, the women had drowned in the cage.

In July 2021, American Aluminum Accessories, the manufacturer of the metal cage in the back of the van, paid a $1 million settlement to Linda Green, the mother of Nicolette Green.  Civil lawsuits by Newton’s family, as are criminal charges against the deputies.  Bishop and Flood have been charged with involuntary manslaughter, and Flood, who drove the van around a barricade against the advice of a National Guard soldier, is also facing charges for reckless homicide.

Product liability is when a defective vehicle part or other defective product caused or contributed to an accident involving injuries or death.  A Columbia car accident lawyer can help you if you were injured in a car accident involving a malfunctioning car part; you might be entitled to damages from the manufacturer of the car or the part.  Contact The Stanley Law Group for an initial consultation on your case.

By The Stanley Law Group | Posted on August 17, 2021
« How Much Is Your Motorcycle Helmet Protecting You?
What Happens If The Driver Who Caused Your Accident Does Not Have Insurance? »