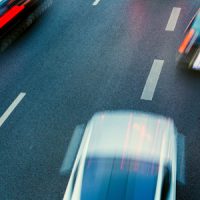 High-speed police chases have formed the climactic scenes of plenty of action movies; the flashing lights and noisy sirens are plenty interesting to watch on a screen from the safety of your home.  When a car speeds past you, followed by the sound of police cars approaching, it is much scarier.  The danger is real whenever anyone drives near you at a speed much higher than the speed limit, no matter the reason.  It could be a drunk driver, someone involved in a drag race, or a participant in a police chase, whether a police car or the car they are pursuing; who is driving has no effect on the severity of your injuries, but the speed at which they are traveling does.  Your chances of surviving a 40-mph crash are much greater than surviving a 100-mph crash, no matter who is behind the wheel.  If you have been seriously injured in a traffic accident involving excessive speed, contact a South Carolina car accident lawyer.

On October 7, Derrick Brown of Lake City was driving his pickup truck in a southbound lane of U.S. 52.  Suddenly, a 2020 Nissan traveling much faster than the speed limit crashed into Brown’s vehicle, causing it to veer into a northbound lane and collide with an approaching cement mixer truck.  Brown died at age 38 from injuries sustained in the crash.

The Nissan was going so fast because its occupants were fleeing from an undercover Highway Patrol car that had begun flashing its blue lights in an attempt to pull the car over for a traffic stop.  The collision that claimed Brown’s life brought the chase to an end, and deputies arrested all four of the men inside the Nissan, none of whom sustained serious injuries in the crash.

All four men are being held in jail without bond while their case is pending.  Whatever the outcome of their criminal case, Brown’s surviving family members have the right to file a wrongful death lawsuit in civil court.

A Columbia car accident lawyer can help you if your injuries are the result of a traffic accident stemming from a high-speed police chase.  Contact The Stanley Law Group for a consultation.

By The Stanley Law Group | Posted on November 11, 2020
« South Carolina Has One of the Highest Rates of Drunk Driving Accidents in the United States
How Effective Is Emma’s Law at Preventing DUI Car Accidents? »