What Do The Latest Developments In Autonomous Vehicle Technology Mean For South Carolina Drivers? 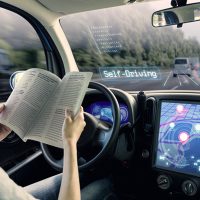 It is a familiar scene.  Your frugal uncle, who drove his previous vehicle more than 200,000 miles before it finally gave up the ghost, purchases the simplest, most practical, and most economical new car on the market.  As he takes it for a test drive, it objects to his every move with a barrage of beeps and flashing lights.  Its touch screen peppers him with questions.  He comes away from the experience with the feeling that trying to drive a car that thinks it is smarter than you are is like trying to reason with a bratty teenager.  Driver assist technology is here to stay, and it won’t let you forget it, but a new generation of autonomous vehicle technology looms on the horizon.  The autonomous vehicle technology in the cars that are currently on the road has certainly prevented plenty of accidents, but it is not enough to save distracted drivers from themselves.  If you have been injured in a distracted driving accident, contact a Columbia car accident lawyer.

End-to-End Learning Is for Cars, Too

Except for some robo-taxis in San Francisco, there are no vehicles currently on the road that are designed to reach their destination without any real time input from a human driver.  Within the same car, each autonomous feature works independently of the others.  Meanwhile, companies in Israel, the United Kingdom, and the United States are working on developing fully self-driving cars that use end-to-end learning.  The car’s neural network receives input from its cameras and lidar sensors, the same features which enable driver assist technology to work.  The difference is that the neural network synthesizes the input with its constantly updated GPS maps in order to decide on its next move.  Some of the companies even have human drivers train the cars how to react in certain situations.  This higher order thinking in autonomous vehicles is called end-to-end learning; end-to-end learning also exists in computer natural language processing technology.  It is how computers can write a sequel to Kafka’s Metamorphosis instead of just answering yes and no questions.

As Will Douglas Heaven of MIT Technology Review points out, the self-driving car industry is known for “getting high on its own supply,” and there are no current plans to make cars with end-to-end learning commercially available.  For now, we have the current generation of driver assist technology, which prevents some distractions while causing others.  For the foreseeable future, your chances of getting into a collision with a driver distracted by a cell phone or a smarty-pants car are much greater than seeing a car driving down the road with no one inside.

By The Stanley Law Group | Posted on September 12, 2022
« What Is Honoring The PACT Act, And How Can It Help Veterans Exposed To Contaminated Water At Camp Lejeune?
How Do Doctors Diagnose Mesothelioma? »