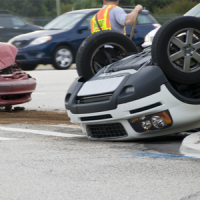 If someone is injured or killed in a single-vehicle crash, is the accident always the driver’s fault?  It depends on the circumstances.  In some instances, victims and their families have sued parties other than the driver in a single-vehicle accident and made a strong case that they were at fault.  One of the most common scenarios is dram shop liability, which is where a court rules that the bar that served alcohol to the drunk driver before he or she drove is legally responsible for the DUI crash.  Counties and cities might also be liable for single-vehicle crashes if the true cause of the accident was a preventable hazard on the road, such as insufficient streetlights.  A car accident that took place this week involved a car where the only occupants were two children well below the age of driver’s license eligibility, which raises all kinds of questions about whose negligence led to this dangerous situation.  The answers to these questions could have consequences in the civil or criminal courts.  If you have suffered serious injuries in a single-vehicle accident, contact a South Carolina car accident lawyer.

A nightmarish scenario unfolded on the morning of April 11 in rural Orangeburg County near Neeses.  Two girls, ages 11 and 9, took turns driving a Chevrolet Cruze down a dirt road; the car belonged to the mother of one of the girls.  Due to the drivers’ lack of driving experience, the car crashed into an embankment, and the impact caused it to overturn and ignite.  When paramedics and firefighters arrived at the scene, one of the girls had died of her injuries, but the other was transported to a hospital, where she was able to tell the first responders what had happened.  (The Times and Democrat did not release the children’s names.)

The girl said that she and her friend had been abducted.  She claimed that the kidnappers fled into the woods and she and her friend were trying to drive themselves home; they lost control of the car when they tried to switch drivers.  When police spoke to the mother of the surviving girl, she said that she had last seen the girls when she went to sleep at 1:00 that morning.  An investigation into the accident and the events leading up to it is still going on.  Witnesses said that they saw the girls driving the car on the dirt road early in the morning; some said that the car was heading east, as it was when it crashed, while others said that it was heading west.

A Columbia car accident lawyer can help you even if you were the only person involved in the accident that caused your serious injuries, or if you were the driver of the only car involved.  Contact The Stanley Law Group for help with your case.

By The Stanley Law Group | Posted on July 11, 2021
« Medical Malpractice Lawsuit Against Hospital After High-Risk Patient Suffers Cardiac Arrest While Anesthetized for Routine Procedure
The Perils Of Lake Swimming In South Carolina »