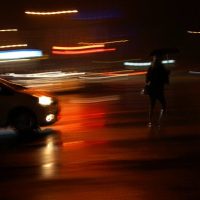 The hazards associated with young, inexperienced drivers get a lot of publicity.  Although a disproportionate share of incidents of speeding, DUI, and collisions involve drivers younger than 25, in other words, the people who have been driving for less than a decade, there are also plenty of reasons to worry about drivers who are nearing the end of their driving careers.  Many elderly people have decided to surrender their car keys after a collision or a near miss; in some cases, it is their children who make this decision for them after such an incident.  If your family had the “it’s time for Grandpa to give up the car keys” after Grandpa hit a mailbox, consider yourself lucky.  Last month, an elderly driver in Orangeburg County fatally struck a pedestrian.  If you have been injured when a car struck you while you were walking, contact a Columbia car accident lawyer.

Brenda Washington lived on Maple Street, in the town of Norway.  On September 26, 2021, she was walking within the town limits shortly after dark.  A few minutes after 8:00 p.m., Washington attempted to cross U.S. Highway 321 on foot, near the intersection with Lexington Avenue.  A 2017 Mercedes struck and injured Washington as she crossed the southbound lanes of Highway 321.  Washington died of her injuries a short time later at Regional Medical Center in Orangeburg.  She was 62 years old.

The driver of the Mercedes was wearing a seatbelt and was not injured in the collision. The Times and Democrat did not indicate the driver’s name, but it said that she was a 77-year-old woman.

Justice for Pedestrians Struck by Cars

Pedestrians who get hit by cars are at much higher risk of serious injury or death than occupants of vehicles who get hit by another vehicle.  Alcohol plays a role in a disproportionate number of pedestrian accidents, either because the driver or the pedestrian was under the influence of alcohol at the time of the collision, but this does not seem to be the case with the accident that took Brenda Washington’s life.

If you file a personal injury or wrongful death lawsuit related to a pedestrian accident, you have an easy time showing that the driver had a duty of care not to strike the victim; the very least of a person’s responsibilities when driving is to avoid hitting pedestrians.  Lawsuits are more common in car accidents involving pedestrians than they are when all parties were occupants of motor vehicles at the time of the collision, because pedestrian accidents are more likely to result in injuries so severe that they exceed insurance policy limits.

A car accident lawyer can help you collect damages if you suffered serious injuries as a pedestrian struck by a car.  Contact The Stanley Law Group in Columbia, South Carolina or call (803)799-4700 for a free initial consultation.