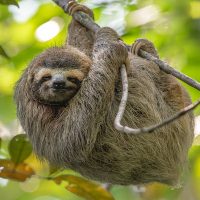 Nearly two decades have passed since the first Ice Age film debuted in theaters, but the image of the friendly sloth remains in the popular imagination; sloth plush toys still appear under Christmas trees, and cartoon sloths adorn children’s clothing.  Sloths are adorable, but they do not share your enthusiasm for cuddles.  They digest food more slowly than any other mammal species, and in the wild, they hold onto the same branch without changing locations for up to a week.  They are also solitary, interacting with other sloths only during the breeding season.  As cute as they are, sloths are entirely unsuited to being petting zoo animals.  The mother of a child bitten by a sloth at an animal encounter exhibit alleges that the owners of the facility were negligent by allowing visitors to get so close to the animal.  She has filed a premises liability lawsuit against the owners.  If you were injured by an animal at a place of business, contact a Columbia premises liability lawyer.

Heather and Henry Galvin opened Charleston Anteaters and Exotics several years ago as a petting zoo where tourists and locals could visit the Galvins’ menagerie of rabbits, flying squirrels, turtles, tortoises, and anteaters.  When Sid the sloth joined the group in late 2019, he became the star attraction, so that, by early 2020, the Galvins had changed the name of the facility to Charleston Sloth and Exotics.

On June 28, 2021, Candise Gore and her child visited Charleston Sloth and Exotics.  Employees gave them fruit slices to feed to the sloth and opened the sloth enclosure for them.  Gore was holding the sloth and taking selfies when the sloth bit the child’s finger.  The following month, Gore filed a lawsuit against Charleston Sloth and Exotics, alleging premises liability.  She alleges that the staff of the petting zoo did not give the family proper instructions about interacting with the sloth.  She also alleges that the Galvins did not have a license to keep or display the animals.

The Galvins claim that staff members warned Gore about the potential for sloth bites and that they tried to alert her three times to an impending bite while she took selfies with the animal.  The Galvins refunded Gore her money for the visit and texted her numerous times in the days afterward, offering to pay the child’s medical bills.  Heather Galvin said that this was the first time that the sloth had bitten a human.  A spokesperson for a zoo in Florida told The State that sloths are poorly suited to being petting zoo animals; captive sloths famously dislike being handled by humans, even humans who are familiar to them.

The premises liability lawyers at the Stanley Law Group can help you seek damages if you suffered preventable injuries at a place of business, whether the injury was a slip and fall accident, a sloth bite, or anything else.  Contact The Stanley Law Group in Columbia, South Carolina or call (803)799-4700 for a free initial consultation.

By The Stanley Law Group | Posted on March 8, 2022
« What To Do If You Get Injured In An Accident At A Supermarket
Driver Remains In Jail After Johns Island DUI Crash That Caused One Death And Seven Injuries »