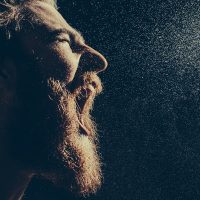 Phineas Gage has been called the world’s most famous neurosurgery patient.  In 1848, while at work building a railroad in Vermont, he was injured in an accident where a railroad spike went through his head.  The fact that he survived was surprising enough, but his behavioral changes after the accident have made him a legendary case in the history of neurology.  His physical recovery from the accident was swift; he was walking days later.  In terms of personality, though, he was a different person.  For the first two weeks after the accident, he barely spoke, and only in monosyllables.  He gradually regained his verbal abilities, but his behavior was bizarre.  Before the accident, he had been polite and sociable, but afterwards, he was foul-mouthed and belligerent.  He used to walk outside in the New England winter with no overcoat or boots.  Gage’s symptoms are now known to be typical of traumatic brain injury (TBI), the most common causes of which are motor vehicle accidents, assault, and contact sports like tackle football.  If you have been diagnosed with TBI after a car accident, contact a Columbia car accident lawyer.

How TBI Affects Behavior and Mood

The mildest form of TBI is concussion, where the symptoms, which include headaches, light sensitivity, confusion, and depression, usually resolve on their own.  Moderate to severe TBI can cause these symptoms and others to last for years; sometimes they improve over time, and sometimes they are permanent.  Psychological and behavioral symptoms of TBI can include the following:

Adjusting to a New Normal After TBI

People with TBI find that certain situations aggravate their symptoms.  For example, they might feel irritable or on edge in crowded places, or they might not be able to tolerate deviations from their routine.  You might need to change career paths if a TBI impairs your short-term memory, or you might not be able to work at all.  It is devastating when, because of a TBI, a close family member behaves differently or no longer relates to you like they did before the injury.

Plaintiffs in personal injury lawsuits have the right to request noneconomic damages.  Also called general damages, they are meant to compensate you for the non-financial ways the accident made your life worse.  If, because of a TBI sustained in a car accident, your spouse went from being your confidant, buddy, and source of emotional support to needing constant care and behaving thoughtlessly toward you, this is definitely a reason to seek noneconomic damages.