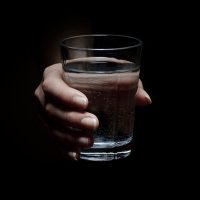 Trichloroethylene, also known as perchloroethylene (PCE), is a type of organic solvent known as a chlorocarbon.  Its industrial uses include cleaning automotive brakes, and especially the dry cleaning of clothing and household linens.  Therefore, when journalists refer to dry cleaning fluid or dry-cleaning chemicals but do not specify which ones, they are usually referring to tetrachloroethylene.  Anyone who has ever walked into a dry cleaner’s shop to drop off or pick up clothes that require dry cleaning, you have been around tetrachloroethylene; you probably even recognize its smell, which can be detected at concentrations as low as one part per billion (ppb).  Prolonged exposure to tetrachloroethylene at concentrations higher than the limit legally considered safe can increase the risk of illnesses such as cancer and Parkinson’s disease.  Tetrachloroethylene is one of the volatile organic compounds (VOCs) that was present in the drinking water at Camp Lejeune Marine Corps Base in North Carolina until the late 1980s, causing many military veterans and their family members to develop serious illnesses.  If you have become ill due to preventable environmental exposure to dangerous VOCs at Camp Lejeune or elsewhere, contact a Columbia personal injury lawyer.

How Dangerous Is Tetrachloroethylene?

Exposure to tetrachloroethylene can occur by breathing it through the air, ingesting it through drinking water, or absorbing it through the skin.  It is present in the soil near dry cleaning facilities and other industrial operations that use it, and it can accumulate in plants that have grown in contaminated soil.  At high concentrations over a long period of time, tetrachloroethylene in the drinking water can lead to cancer, Parkinson’s disease, and liver disease.

People who were exposed to tetrachloroethylene and other VOCs in the drinking water at Camp Lejeune Marine Corps Base before 1987 and subsequently developed cancer, Parkinson’s disease, infertility, and other conditions as a result of the contaminated water have the right to seek compensation for their medical expenses and other losses.  Whether your tetrachloroethylene exposure happened at Camp Lejeune or elsewhere, talk to a personal injury lawyer about your rights and options.

The personal injury lawyers at the Stanley Law Group can help you if you suffered a serious illness because of environmental exposure to tetrachloroethylene or another volatile organic compound found in contaminated drinking water.  Contact The Stanley Law Group in Columbia, South Carolina or call (803)799-4700 for a free initial consultation.

By The Stanley Law Group | Posted on December 6, 2022
« What Happens If You Get Injured In A Car Accident That Was Partially Your Fault?
How Much Money Can A Personal Injury Lawyer Help You Get After A Car Accident? »