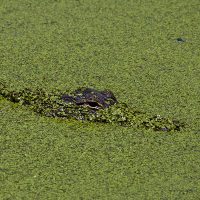 South Carolina’s wildlife species are among its many attractions.  If you retire to South Carolina, then you can look forward to looking out the window of your waterfront property and seeing ibises and sandpipers.  If you go for a nature hike, you have a chance of seeing wolves, foxes, coyotes, white-tailed deer, opossums, armadillos, and more.  South Carolina is also home to a disable population of American alligators, and as real estate developments expand farther into places that were previously wilderness, it seems like encounters between humans and alligators are becoming more frequent.  Not only might you encounter gators while fishing or canoeing, but you might also see them swimming in canals in residential neighborhoods or sunning themselves beside ponds on golf courses.  Preventable accidents that take place on private property are covered by premises liability law, and this rule applies to animal attacks, too.  If you have been injured in an animal attack on someone else’s private property, contact a Columbia premises liability lawyer.

The Myrtle Beach Golf and Yacht Club Association is the homeowners’ association (HOA) responsible for maintaining the outdoor areas of the residential neighborhood near the golf course.  Since alligator mating season lasts from April to June, residents had been observing an increase in the alligator population of the ponds near the waterfront property.  They had also complained to the HOA about the tall grass around the edges of the ponds, but the HOA had not cut the grass, so one day in June 2022, a resident took matters into his own hands.  The man was mowing the tall grass near the pond when an 11-foot alligator that had been lurking in the pond lunged at him and dragged him into the water.  Police officers and members of the South Carolina Department of Natural Resources responded to a call about the attack, and when they arrived at the scene, they pronounced the man dead and euthanized the alligator.

Who Is Legally Responsible for Alligator Attacks?

The alligator attack is still under investigation, but based on social media posts by residents, it seems that they are placing blame on the HOA.  Lawn maintenance in common areas of the neighborhood, in other words, not the yards belonging to individual residents, are the HOA’s responsibility to maintain, and this is where the attack took place.  The HOA likely could have prevented the attack by maintaining the lawns next to the lake or by removing alligators from the ponds, especially since alligators in the area had previously killed several dogs.

Premises liability lawsuits apply to neighborhoods with an HOA, not just to restaurants and supermarkets.  The premises liability lawyers at the Stanley Law Group can help you if you got injured in a preventable accident due to substandard maintenance of common areas of your neighborhood.  Contact The Stanley Law Group in Columbia, South Carolina or call (803)799-4700 for a free initial consultation.

By The Stanley Law Group | Posted on September 21, 2022
« How Do Doctors Diagnose Mesothelioma?
Do Personal Injury Lawsuits About Exposure To Carcinogens Cover Alternative Cancer Treatments? »