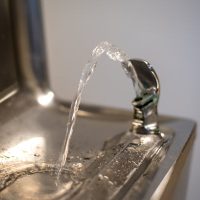 Most people associate the word “vinyl” with phonograph records, imitation patent leather, or a type of material used to weatherproof the outsides of buildings, but the term refers to a whole group of molecules that can occur not only in solid form, but also as liquids or gasses.  One of these substances is vinyl chloride, which is currently used in the manufacture of certain types of plastics.  Vinyl chloride was used as a propellant in aerosol spray cans until the 1970s, and decades earlier, researchers investigated its potential as an anesthetic, but now it is not used for either of those purposes because it is so dangerous.  Vinyl chloride gas is highly flammable, but it can still endanger human health in many different ways, even when it does not start fires.  For example, drinking water contaminated with vinyl chloride is associated with an increased risk of several types of cancer; it is one of the carcinogenic substances found in the drinking water at Camp Lejeune Marine Corps Base in the 1980s.  If you have become ill due to preventable exposure to vinyl chloride at Camp Lejeune or elsewhere, a Columbia personal injury lawyer.

Inhalation of vinyl chloride vapors can cause acute illness; symptoms include headache, nausea, drowsiness, dizziness, and loss of coordination; symptoms usually appear after five minutes of exposure to 8,000 parts per million of vinyl chloride gas.  Prolonged exposure can cause fatal respiratory depression, so it is important to leave the area quickly and go outdoors or to a well-ventilated area; call for help if you cannot get out on your own.  If vinyl chloride makes direct contact with the skin, it can cause frostbite-like injuries.

Vinyl Chloride and Other Carcinogens in Camp Lejeune Drinking Water

Vinyl chloride is one of several volatile organic compounds (VOCs) found in two wells that provided drinking water at Camp Lejeune Marine Corps Base until the wells were closed down in the mid-1980s.  It increases the risk of hepatic angiosarcoma, a type of liver cancer that is rare in people without vinyl chloride exposure.  It is also associated with cancer of the kidneys, stomach, blood vessels, and skin.  The cancerous tumors may develop many years after the exposure.

If you spent at least 30 days at the Camp Lejeune Marine Corps Base during or before 1987 and were subsequently diagnosed with cancer, it could be due to exposure to vinyl chloride or other VOCs in the drinking water.  Recently enacted federal legislation has made it easier for veterans and their family members who developed cancer and other illnesses as a result of exposure to VOCs in the Camp Lejeune drinking water to recover compensation.

The personal injury lawyers at the Stanley Law Group can help you if you have been diagnosed with cancer after exposure to vinyl chloride or other carcinogens in drinking water.  Contact The Stanley Law Group in Columbia, South Carolina or call (803)799-4700 for a free initial consultation.