Clarendon County Pedestrian Dies After Being Struck by Car 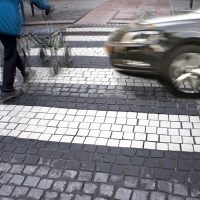 In the first two thirds of 2020, 578 people have died in traffic accidents in South Carolina.  Ninety of the victims were pedestrians, which means that approximately one out of every six people killed in car accidents was not driving or riding in a car at the time of the crash.  The human body has virtually no defenses against a machine that weighs several tons, so pedestrians are at high risk of death or catastrophic injury if they are hit by cars.  Rebuilding your life after being seriously injured in a car accident is not cheap.  The medical bills can add up to the hundreds of thousands, if not the millions, if you have permanent injuries that require ongoing treatment.  Consider also that serious injuries can limit your ability to work, so many people injured in car accidents lose their main source of income by no longer being able to work.  A South Carolina car accident lawyer can help you get the financial support you need to cope with serious injuries resulting from a car accident.

The accident happened in August 2020, when Marvin Rhames of Manning was walking south besides the southbound lanes of Silver Road, near Summerton Highway.  A 2005 Mazda approached from behind and veered off the side of the road, striking Rhames.  As the law requires, the driver of the car remained at the scene of the accident until police and emergency medical personnel arrived.  The driver was not seriously injured in the accident; he was wearing a seatbelt.

Rhames was transported to Prisma Health Richland in Columbia, about 60 miles away from the site of the accident.  He died from his injuries several hours later.  He was 54 years old.

A police investigation into the accident is still in process, so the legal consequences have yet to be seen.  Leaving the scene of an accident that causes injuries or fatalities is a crime, but this driver remained at the scene.  He may, however, face charges for vehicular manslaughter because Rhames died from injuries sustained in the crash.

As for civil lawsuits, Rhames’ surviving relatives have the right to file a civil lawsuit against the driver for wrongful death.  They can seek economic damages for the financial support Rhames would have provided them if he had survived, as well as noneconomic damages for emotional distress and loss of companionship.  If it turns out that road conditions or a defective part in the car contributed to the accident, the victim’s family might also have a case against the county or the car manufacturer.  If it turns out that the driver was drunk, the victims’ family can file a premises liability lawsuit against the bar that served alcohol to him.

A Columbia car accident lawyer can help you recover damages if you got hit by a car while you were on foot.  Contact The Stanley Law Group for a consultation.

By The Stanley Law Group | Posted on October 14, 2020
« Eight Things to Do After a Car Accident and Two Things Not to Do
Victim’s Family Sues Driver of Pickup Truck Involved in Fatal Shelter Cove Crash »